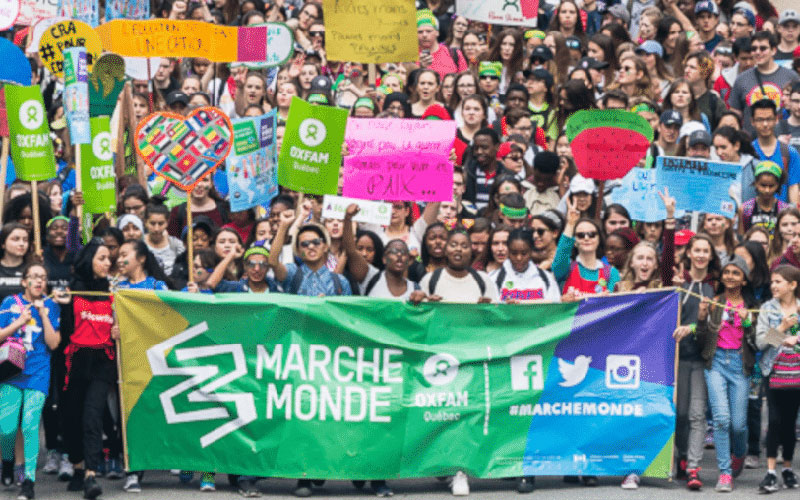 Montreal designated a Fair Trade Town during the World Walk

Today, the City of Montreal will be designated as a Fair Trade Town during the World Walk. Montreal will be the 27th Canadian city and the 10th city in the province of Quebec to receive this designation.

The Fair Trade Town title distinguishes a community as a leader in sustainable development and confirms its commitment to support the principles of fair trade, including fair pricing, respect for labour standards, environmental sustainability, and more direct and equitable trade.

This is an important moment for the fair trade movement in Quebec and Canada. Montreal is a major hub for socially and environmentally sustainable business leadership with many Fairtrade certified companies headquartered there.

For several years, the Oxfam-Québec World Walk has been a Fair Trade Event. It is therefore with pleasure that it has offered Fairtrade Canada and the Association québécoise du commerce équitable (AQCÉ) the opportunity to take advantage of this rally to present the Fair Trade Town designation to Montreal.

The Executive Director of Fairtrade Canada, Julie Francoeur, congratulated and thanked all the volunteers who worked hard to see Montreal join the ranks of the 2,000+ already designated Fair Trade Towns in the world. “Congratulations and a special thank you to the passionate people at Oxfam-Québec who have made this cause an essential part of their daily actions. Montreal is making significant commitments to sustainable development right here in its management of the territory and the urban fabric. Through this designation, it is also committed to the sustainable development of the communities on the other side of the world who grow the coffee, cocoa, sugar or bananas that energize the residents of Montreal every day. Québec’s metropolis is not only a city of committed citizens but also home to dozens of innovative and pioneering fair trade companies that radiate far beyond the island of Montreal. It is the agricultural producers and workers of the South who thank you for this ongoing commitment!”

The young walkers participating in the World Walk have largely contributed to the recognition of Montreal as a Fair Town, either by managing a Magasin du Monde or by visiting Montreal’s stores as part of the nomination process. Fouzia Bazid, project manager at the Association québécoise du commerce équitable, says that “several organizations, companies, and committed citizens have participated in the designation process, which demonstrates the positive impact of the diversity of the fair trade movement. Together, she says, they highlighted the rich history of fair trade in Montreal and the extent of this movement in the community.”

“Today, we salute the City of Montreal for its efforts to promote fair trade, and for the impact that these have on families, especially women and girls, with whom we work daily in developing countries”, says Denise Byrnes, Executive Director of Oxfam-Québec.

The elected leader responsible for ecological transition and resilience, Living Space and Urban Agriculture on the Executive Committee, Laurence Lavigne Lalonde, sees the designation of Montreal as a Fair Town favorably. “The City of Montreal is very proud to participate in the fair trade movement and to obtain the Montreal Fair Trade Town designation, which aims for a better and fairer world. The City has revised its procurement policy to include the principles of equitability and, increasingly, to focus on the purchase and supply of fair trade products in its facilities and operations. With the Plan’s 204 partners, the City of Montreal is committed to sourcing more responsibly and supporting the social and solidarity economy.”